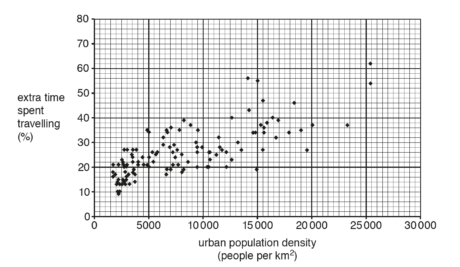 Describe the relationship shown in the graph between urban population density and the extra time spent on traveling. Use statistics in your answer. (4 marks)

Example from the Student’s work

Cities create their own climate and weather conditions (small scale variations). This is also known as climatic dome effect within which the weather is different from that of the surrounding rural areas in terms of temperature, relative humidity, precipitation, visibility and wind speed.

Within the urban climatic dome two levels can be recognized

Urban heat island signifies the temperature differences between the urban and rural areas. Urban areas are generally 2 to 4 degree C warmer than those of the surrounding countryside, depending upon the size and character of the city. An urban area can be identified as a warm spot in the sea of the surrounding cooler rural air mass.

Cities tend to be warmer than the surrounding rural areas for the following reasons:

Size and shape of the buildings affect wind pattern in the cities. Air is forced to rise upward and is displaced side wards on the windward side of the buildings. On the other hand, it is pushed downwards at the leeward side of the structure (refer to the diagram). The uneven surface area of the cities due to varying structures and skyscrapers generate frictional drag on air moving over and around them.

Air quality in urban areas is often poorer than in rural areas due to suspended particulates in the air mainly from power stations and vehicle exhausts. This also includes cement, dust, tobacco smoke, carbon monoxide, sulphur dioxide, ash, and pollen. Coastal cities may also have large number of sea salts. All these may produce haze, acid rain, smog (mixture of fog and smoke) etc.

Photochemical smog is a haze like condition that develops when pollutantslike oxides of nitrogen and volatile organic compounds created from fossil fuel combustion together with low level ozone interact under the influence of sunlightto produce a mixture of different hazardous chemicals (also known as secondary pollutants). It decreases visibility due to blue-brown haze

Mexico city and Los Angeles have a serious problem with photochemical smog because oft he high-density vehicle and favourable topography that trap the high concentration of photo oxidant gases at low level.

Mexico city is located in a basin where cool air remains trapped by a layer of warm air above it. This is called temperature inversion. The air fails to mix and produce intense pollution effect and photochemical smog. Mexico city is one oft he most polluted places in the world

Wind flows in cities: Down draft and Venturi effect

A glimpse of beer garden in urban canyon of the NYC 🙂

Air Pollution in Delhi: Man made pollution aggravated by the physical features

Refer to Statista.com: The average PM2.5 concentration of the most polluted countries in the world in 2019 and 2020

Represent your note over the world map using MapChart

What are PM2.5 pollutants?

Read: WHO documents on Total Dissolved Solids (TDS) in Water as an indicator of water quality testing

Delhi was the most polluted capital city in the world in 2020, with an average PM2.5 concentration of 84.1 micrograms per cubic meter of air (μg/m³). PM2.5 particulate matter concentrations in the Indian capital were almost 10 times higher than the World Health Organizations PM2.5 target of 10 μg/m³. The second most polluted capital city was Dhaka in Bangladesh. Many cities experienced reductions in PM2.5 pollution compared to the previous year. This was mainly due restrictions on economic activity and travel brought on by the outbreak of COVID-19. (Source: https://www.statista.com/statistics/1135356/most-polluted-countries-in-the-world/)

According to the current UN estimate nearly one billion people live in slums worldwide. In other words, one in every eight persons on this planet currently live in urban slums. The major urban slums of the world’s are – 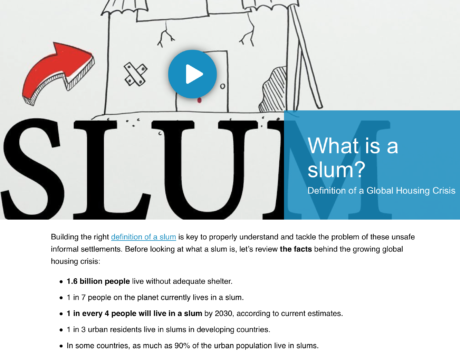 Where are the world’s worst slums?