Internationalism:
The extension of economic activities across national boundaries. This is often referred to as the stage before globalization.

Grobalisation:
The imperialistic ambitions of nations, corporations and organisations to impose themselves on various geographic areas (based on ideas of superiority and practices of dominance, and involving the extension of authority and control of one state or people over another).

A note on Arab Spring
is a term for the revolutionary wave of demonstrations and protests (both non-violent and violent), riots, and civil wars in the Arab world that began on 17 December 2010. The Arab Spring is widely believed to have emerged from the dissatisfaction with the rule of local governments, wide gaps in income levels, including issues such as dictatorship or absolute monarchy, human rights violations, political corruption and so on.
Where:

What is meant by time space convergence?

1. Change in the perception of time and distance and virtual erosion of geographical barrier due to improvement in transport and communication technology in recent times.
2. Virtual shrinkage Physical reduction of time taken to travel between two places due to improvement and major advances in transport and communication system. This has significantly reduced the impact of geographical barriers separating countries and people.
3. It is a process made possible by technological innovation in transportation and communication by which distant places are bought together in terms of the time taken to travel or send messages between them.
4. Heightened connectivity has changed our perception of time, distance and geographical barrier to the movement of people, goods, capital and information.
5. Anti-thesis to Distance Decay model and the concept of frictional effect of distance

Basic definitions:
Transport systems are the means by which materials, products and people are transferred from place to place.
Communication Systems are the ways in which information is transmitted from place to place in the form of ideas, instruction, messages, opinion, views and images. Before, the development of electricity in the 19th century information could only move at the same speed of a transport system carrying it. The development of telegraph and then telephone broke this link and established a new era.

How time-space convergence was calculated by Janelle

Janelle plotted changing travel time between Edinburgh to London (approx. 600 km) in different historical time starting from industrial revolution and found how the space time shrinkage generates the perception of feel close together effect as a two week stage coach journey between Edinburgh to London in 1958 was ultimately superseded by an air travel lasting barely 2 hours. He concluded that the two cities had converged at an average rate of 30 minutes per year over a period of 200 years.

Anti-thesis to time space convergence
Distance decay model- describes the effect of distance on cultural or spatial interactions. It states that the interaction between two places declines as the distance between them increases. However, with the advent of faster travel, distance has less effect than it did in the past.

Frictional effect of distance by Tobler (professor at university of California)– describes the force that creates distance decay. Everything is related to everything else, but near things are more related to each other” is referred to as the “first law of geography.Because of this “friction,” spatial interactions will tend to take place more often over shorter distances; quantity of interaction will decline with distance. Friction of distance is less in developed countries than in poor countries due to better transport infrastructure. It is also less in urban areas than in rural areas.

ICT (information and communications technology or technologies) is an umbrella term that includes any communication device or application, encompassing: radio, television, cellular phones, computer and internet network, hardware and software, satellite systems and so on, as well as the various services and applications associated with them, such as videoconferencing, distance learning, E-voting, electronic commerce and do on.

Military imperatives (political background) behind the development of new technologyMany of the major research and development were actually led by the military might and imperial ambition including several recent innovations in transport and communication. For example, development of Jet engine took place during the Second World War and the Korean conflict in 1950s. Communication satellites and major advances in GIS/GPS own much to the cold war after Soviet Union launched Sputnik in 1957and entered into the era of space race with its rival super power USA. The origin of computing also has its root in wartime research and development, including German Z3 projects. Internet itself has significant military origin.

Internet Revolution: How and why Internet network has grown over time

What is Internet?
A worldwide computer network that can be accessed using computer, mobile telephone, digital TV, etc. The Internet access service can be provided through a fixed (wired) or mobile network: analogue dial-up modem or standard telephone line, ISDN (Integrated Services Digital Network), DSL (Digital Subscriber Line) or ADSL, Cable modem, High speed leased lines, Fiber, Power line, Satellite broadband network, WiMAX, CDMA, Mobile broadband network and so on.
The Internet has revolutionized the field of communication like nothing before. The Internet is a world-wide broadcasting capability, a mechanism for information dissemination, and a medium for collaboration and interaction between individuals through their computers without regard for geographic location. Internet is a widespread information infrastructure, the initial prototype of what is often called Galactic Information Infrastructure. The technological evolution began with early research on packet switching and the ARPANET while the current research continues to expand the horizons of the infrastructure along several dimensions, such as scale, performance, and higher-level functionality

J.C.R. Licklider of MIT in August 1962 introduced his “Galactic Network” concept. He envisioned a globally interconnected set of computers through which everyone could quickly access data and programs from any site. The concept was very much like the Internet of today. Licklider was the first head of the computer research program at DARPA (Defense Advanced Research Projects Agency of US). It started in California with a low speed dial-up telephone line creating the first wide-area computer network ever built. It became necessary to change circuit switched telephone system to packet switching .Plan for ARPANET was published in 1967. In ARPANET design was upgraded from 2.4 kbps to 50 kbps.DARPA wanted to build a networked system that could stretch across the United States linking governmental and scientific organizations using existing phone lines and four Interface Message Processors. For the first time, scientists could harness the power of multiple computers in remote locations. UCLA’s university computer were linked Stanford Research Institute computer ran on the Genie operating system. Computers were added quickly to the ARPANET during the following years, and work proceeded on completing a functionally complete Host-to-Host protocol and other network software.
The original ARPANET grew into the Internet. Internet was based on the idea that there would be multiple independent networks of rather arbitrary design, beginning with the ARPANET as the pioneering packet switching network, but soon to include packet satellite networks, ground-based packet radio networks. LANs and resource sharing began to appear in the late 1970s.
Ethernet technology, developed by Bob Metcalfe in 1973, is now probably the dominant network technology in the Internet and PCs and workstations
World Wide web was born in 1990. The recent development and widespread deployment of the World Wide Web has brought with it a new community, as many of the people working on the WWW have not thought of themselves as primarily network researchers and developers. A new coordination organization was formed, the World Wide Web Consortium (W3C). Initially led by Tim Berners-Lee (the inventor of the WWW) of the MIT’s Laboratory for Computer Science.

ICT Haves and Have-notsDigital divide signifies inequalities in access to ICT such as Internet, mobiles etc. It is a social, economic and political issue referring to the differing amount of information between those who have access to information and communication technology like Internet and those who do not have access to it.
Factors that creates digital divide are-Economic capabilities (measured by GNI per capita disposable income), Spatial location (rural urban set up and threshold population), disability and age (elderly population over 60s the so called ‘silver surfers’ display generation lag and lower adaptability to changing technology), government policy and level of democracy (for example internet censorship and restriction in North Korea), gender inequality (male female differences which in many cases may be a socio-cultural construction) and the level of education and literacy rate. 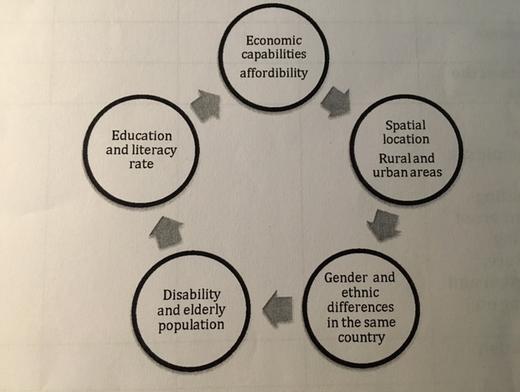 Signifies the spatial pattern of global interaction incorporating the idea of developed core surrounded by underdeveloped periphery. The concept can be applied at various scales.

Food mile (Geography guide, IBO 2009): A measure of the distance food travels from it‘s source to the consumer. This can be expressed either in units of actual distance or of energy consumed during transport.

Think
Are you consuming jetlagged apple?
Where does your food come from?
How well travelled your breakfast is?
How the food has been transported and even packaged?
Do you buy all your cooking ingredients from the super market or do you also buy food from the local farmer‘s market?
Do you eat foods that are locally produced?
Do you grow vegetables in your garden?
Do you eat foods that are in season? 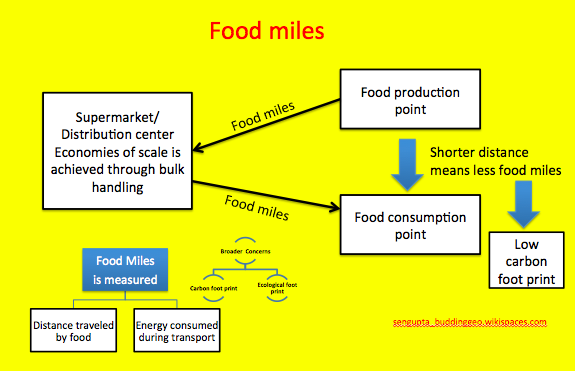 Impact of food miles (food being transported for a great distance)

Ecological footprint is the theoretical measurement of the total area of ecologically productive land and water (cropland, pasture, forest, marsh, river, sea, etc.) that a population requires in order to produce the resources (the energy and materials consumed) it consumes and to absorb its wastes, under prevailing technology.

Strength and sicknesses of the concept of food miles 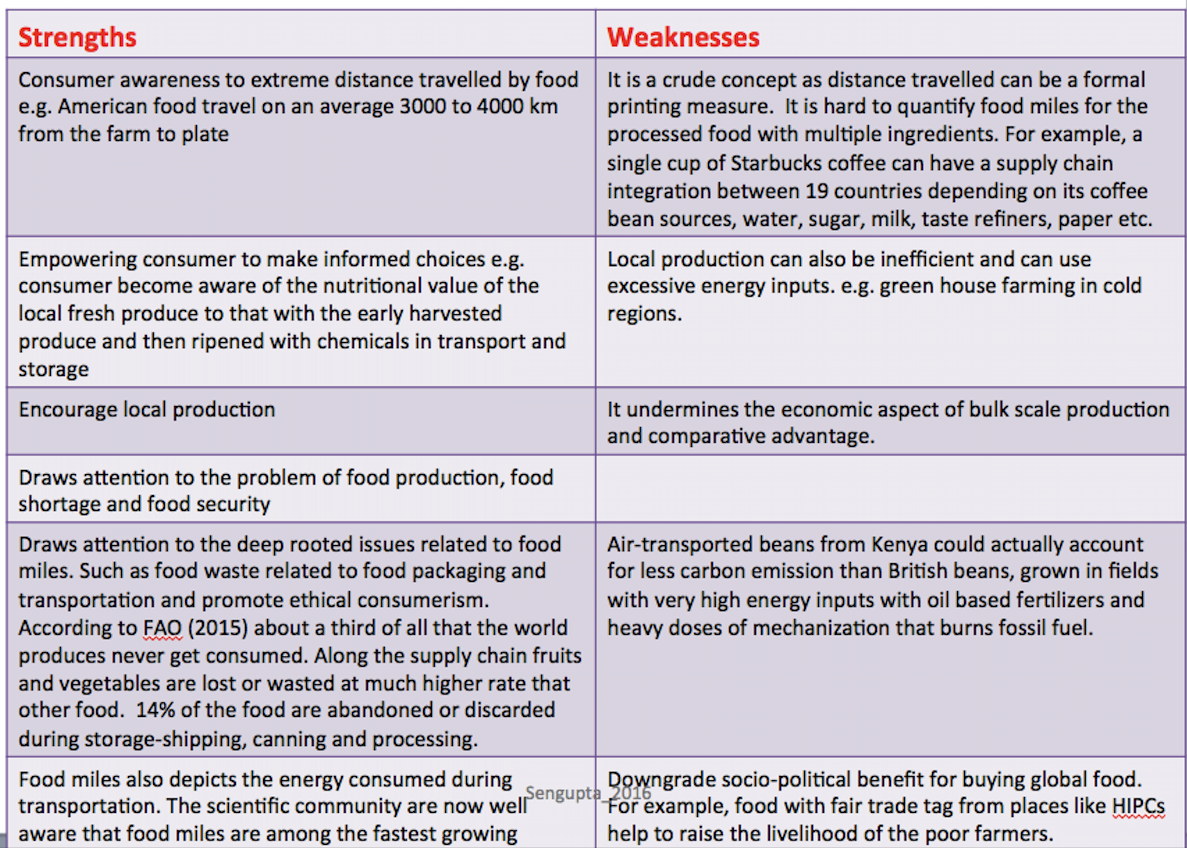 What is behind the brand?…..The backlash of globalization, TNCs, sweat shops, child labour and slavery

BRICS
Click here to find out about BRICS
World economic forum report on the state of BRICS economy, 2016