Click here to see the most populated cities in China

Migration – the movement of people involving a change of residence. It can be internal displacement or international, voluntary or forced. It is usually for an extended period of time (more than a year) and does not include temporary circulation such as commuting or tourism.
Emigration – the process of leaving one country to take up permanent or semi-permanent residence in another.
Brain drain – the emigration of a significant proportion of a country’s highly skilled, highly educated professional population, usually to other countries offering better economic and social opportunity
Remittances – transfer of money or goods by foreign workers to their home country
Refugee – a person fleeing their home country in order to escape danger
Asylum seekers – people who seek refugee status in another country
Illegal immigrants – people who enter another country without permission to remain there.
Internally displaced people (IDP) – those who have fled their homes but continue to live in their own country.

Population Growth and Changes over Time 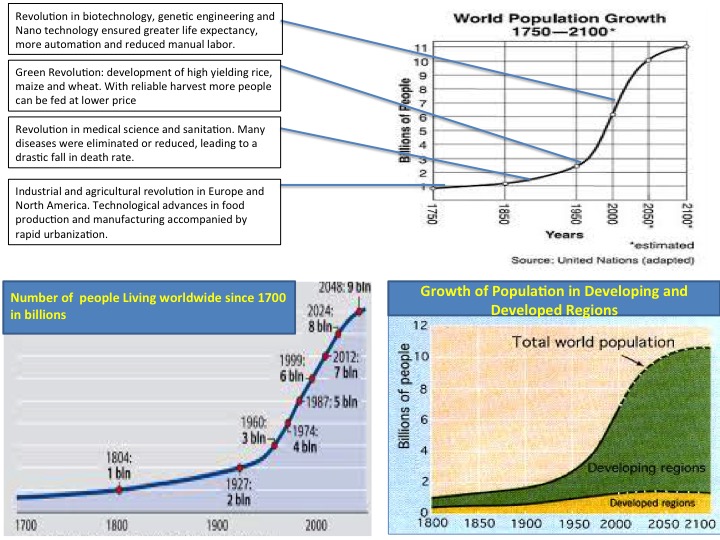 Trends in Birth and Death rate in developed and developing country

The most studied aspect of population structure are age and birth ratio. Other aspects are language, religion, ethnicity, occupation etc. Age-sex structure is conventionally illustrated by the use of population pyramid. Population pyramids are bar graphs that represent the age-sex composition of a country’s population. Each bar graph represents a five year age group apart from the top most bars which usually illustrate the population of 80 years old and above. The male population is represented to the left of the vertical axis and females to the right.

Utility of a Population Pyramid 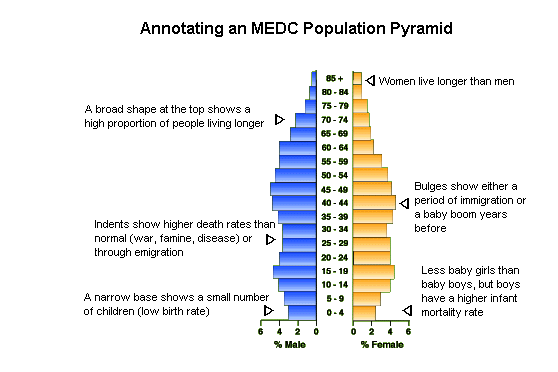 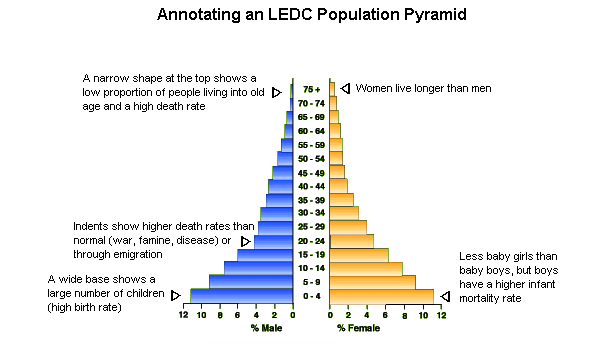 The end of population pyramid ‘The Economist‘, Nov.2014

Over, Optimum and Under population

is a dynamic concept, changes with time and space and as technology improves, total population changes, new discoveries and innovation enhance human capacity to resource utilization.
Human overpopulation occurs if the number of people exceeds the carrying capacity of the region means there are too many people relative to resource and technology creating pressure on the available resource endowment and thereby deteriorating the standard of living of a region.
A region or country can have low population density and still be overpopulated e.g. North eastern Brazil (23 people per sq.km) is overpopulated in respect to the carrying capacity of the region and characterized by low income, poverty, poor living condition and high level of emigration. A country may have high population density and is still able to provide for itself because of high technological and economic advancement, will not be considered as overpopulated e.g. Netherlands with 406 inhabitants per sq.km in 2014 (source: indexmundi, accessed on Oct.2015) is one of the densely populated countrys in Western Europe but is not overpopulated.

Many areas of the world are now overpopulated. The problems faced by people in the overpopulated countries are-

What is the earth’s carrying capacity for the human population?
This question cannot be answered without considering consumption levels, and the technologies used to generate and support the consumption. The Ecological Footprint data suggest that 3 to 4 planets with the current earth’s bioproductive capacity would be required to support the current population if the whole world start consuming at the consumption level of US.

Life expectancy denotes the average number of years a person is expected to live at birth if the current mortality conditions remain unchanged throughout the rest of the life. Life expectancy at birth is the commonly used indicator for analyzing mortality.

WHO Statistics, 2014
According to WHO statistics 2014, people everywhere are living longer. Global average life expectancy has increased by 6 years from 1990. Low-income countries have made the greatest progress, with an average increase in life expectancy by 9 years from 1990 to 2012.The top six countries where life expectancy increased the most were Liberia, which saw a 20-year increase (from 42 years in 1990 to 62 years in 2012) followed by Ethiopia (from 45 to 64 years), Maldives (58 to 77 years). The gender gap is also shrinking. Newly born women in MEDCs are expected to outlive men by 5.5 years. 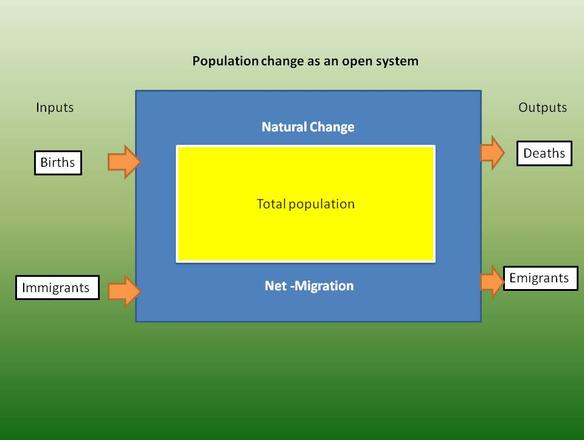 Migration is the permanent change of residence with a complete change of community ties. However, very recent definitions also consider certain temporary movements as migration (refer unesco.org). Migration does not include daily commuting to work, shifting of house in the same neighbourhood and tourism.

Migrations are broadly classified as 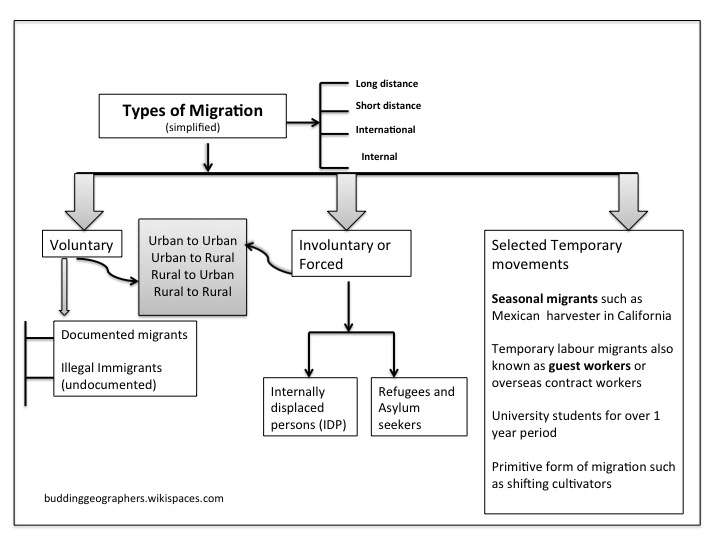 Top Immigrant Countries of the World

Accounts on migration and recent statistics, 2015

Dependency Ratio indicates the relationship between of the economically dependent population to the productive or economically active population. It is expressed as the ratio of the elderly people (aged 65 and older) plus the youthful population (under age 15) to the population in the working ages (16-64). Aging population are usually a product of longer life expectancy and lower birth rate.

Older dependency ratio (ODR) – the number of people aged 65 and above for every 100 people aged 16-64 (working population).

Consequences of Youthful and Ageing Population: Problems and Possibilities

Why is Uganda’s population so youthful?

Youth in Uganda are the youngest population in the world, with 77% of its population being under 30 years of age

A youthful population is defined as a population that has a high proportion of young people (0-14 years of age) due to high birth rates and a decrease in infant mortality. Children are young dependents on the working population.
The high fertility may be due to: children being considered as assets in LEDCs especially for parents who work in the primary sector, lack of education for women about family planning, less access to contraception, religious forbidding for the use of contraception and a high infant mortality rate for which the high birth rate compensates.
The death rate in Uganda however has fallen rapidly in recent years: This is largely due to UNICEF’s global program, which helps to provide children with vaccinations against common infections, improved treatment for Malaria and other medical breakthrough.
The youthful population of Uganda (Ugandans aged 15 or below) stood at 19 million out of a population of 35 million. Many Ugandans are having access to safe water and to an improved sanitation system thereby mortality rate has also decreased. On the other hand, people also compensated for by having more children because of a lack of confidence that their children would survive infancy, thereby creating high fertility rate.

The problems of youthful populations
Economic
Economic burden on tax payers and more government spending for suitable infrastructure development like schools, sports facilities, public transport etc.
Increased unemployment in future if new jobs are not created which may lead to more competition for jobs, increased poverty, conflict and civil unrest
Ecological
Overall shortage of limited finite resources. Over exploitation of agricultural land for more food production and consequent deforestation, soil erosion, desertification and overall depletion of resources.
Socio-cultural
Migration, overcrowding in large cities, in LEDCs shantytowns may start to grow at the city edges, there could be lowering of living standard and a rising crime rate. An increasing population can cause water and land pollution.

Positive sides:
Large manpower for the future that may act as an engine of growth for the economy. Large market for consumer products.
Lower death rate and more innovations in the society.

What is Maternal Mortality?

Death of a woman while pregnant or within 42 days of termination of pregnancy, from any cause related to or aggravated by the pregnancy or its management, but not from accidental causes (WHO).
Maternal mortality rate (MMR): is the number of maternal deaths in a population divided by the number of women of reproductive age, usually expressed per 1,000 women.
In 2013, 289 000 women died during and following pregnancy and childbirth. Almost all of these deaths occurred in low-resource settings, and most could have been prevented.

Relationship of MMR to other key socio-economic indicators

Disparity between LEDCs and MEDCs in MMR
Almost all maternal deaths (99%) occur in LEDCs due to inequalities in the access to health services, and because of the huge gap between rich and poor. More than half of these deaths occur in sub-Saharan Africa and almost one third occur in South Asia.

Major reasons of high MMR in some countries: Why do women not get the care they need?
Poverty
– Malnutrition
– Lack of access to good health care

Inadequate health care services
– Lack of trained health personnel. Only 46% of women in low-income countries benefit from skilled care during childbirth6. This means that millions of births are not assisted by a midwife, a doctor or a trained nurse.

Higher fertility rate:
– Birth spacing: Women in developing countries have on average many more pregnancies than women in developed countries, and their lifetime risk of death due to pregnancy is higher.

1. Interpret the following infographic to describe the composition of the dependent and working population in the World 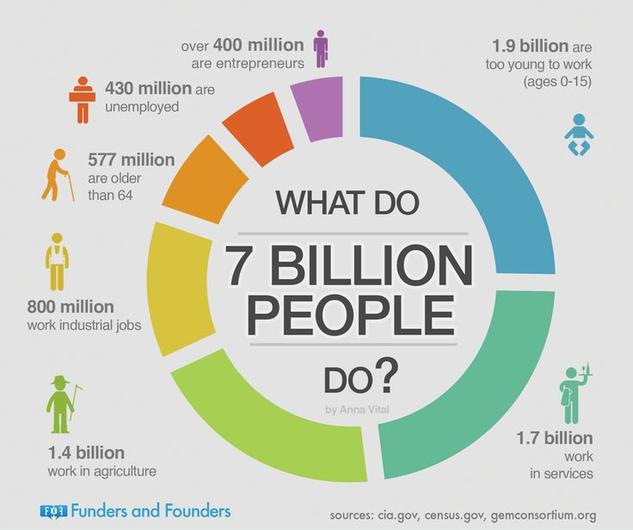 2. Interpret the linked infographics in selected groups. Each group will have only two minutes time to memorize and then each team needs to create their own infographics by putting in the information they could memorize as a team. Finally each group needs to explain the content of the infographics according to their understanding in front of the other groups.

Suggest three ways in which a population pyramid for an LEDC is likely to be different from that of an MEDC.

Explain how death rates have been reduced in NICs (newly industrialized country), such as in Philippines, Malaysia, Brazil, India,Thailand, Turkey. OR suggest reasons for the large increase in the percentage of the population over the age of 65 which is expected in Indonesia and Malaysia by 2025.

Explain why, in LEDCs such as Uganda young dependents make up a large percentage of the population/ reasons for high birth rate in LEDCs OR Suggest three reasons why the birth rate is higher in Pakistan (an LEDC) than Australia (an MEDC).

Explain why the governments of MEDCs, such as the Germany, Japan, are concerned about the ageing population.

Demographic data that you should know